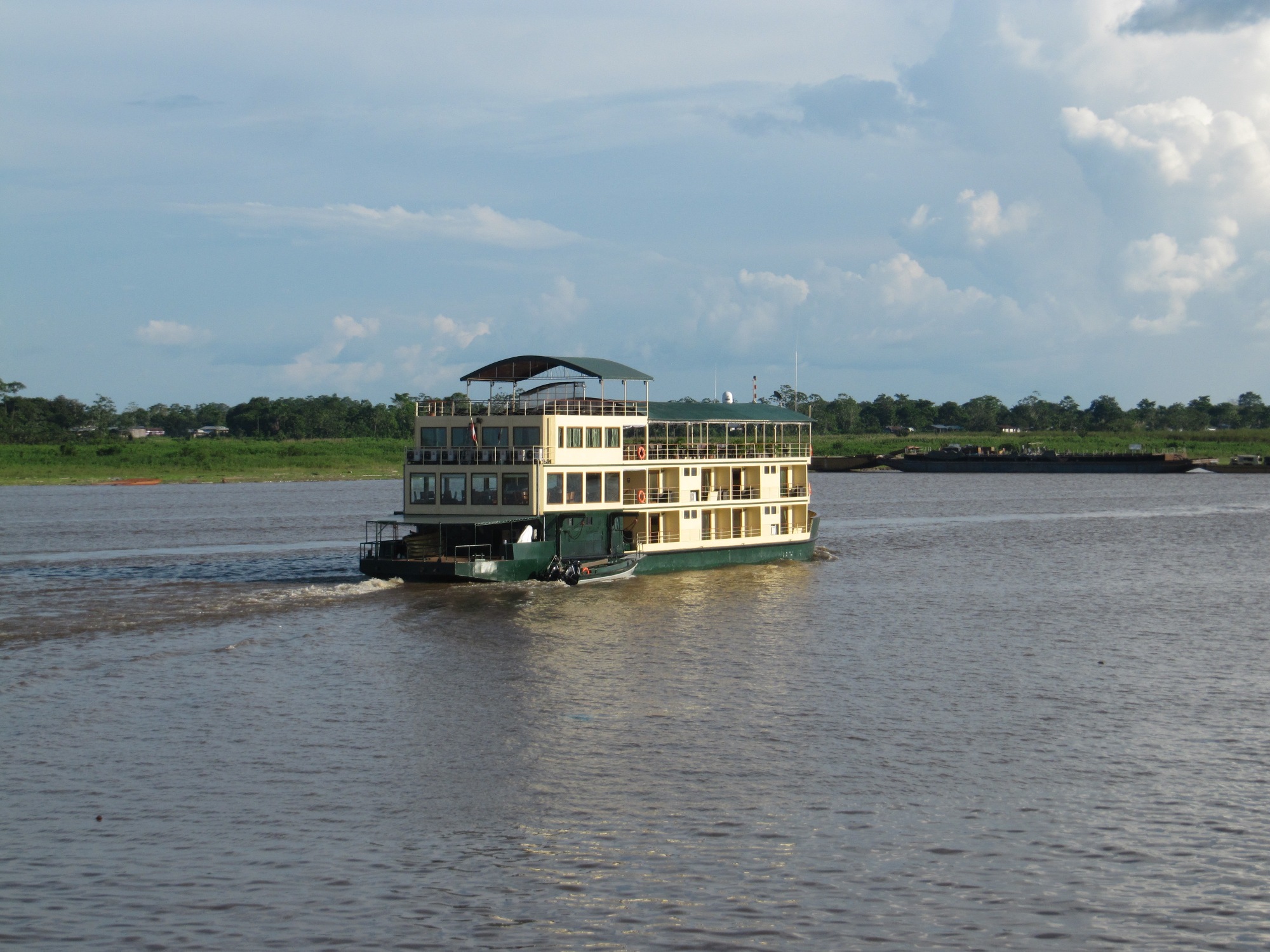 I had spent my first few days in the jungle at an eco-friendly, uber-fancy tourist lodge several hours upriver from Iquitos and loved every minute of it. The experience of travelling aboard a cargo boat was somewhat different. 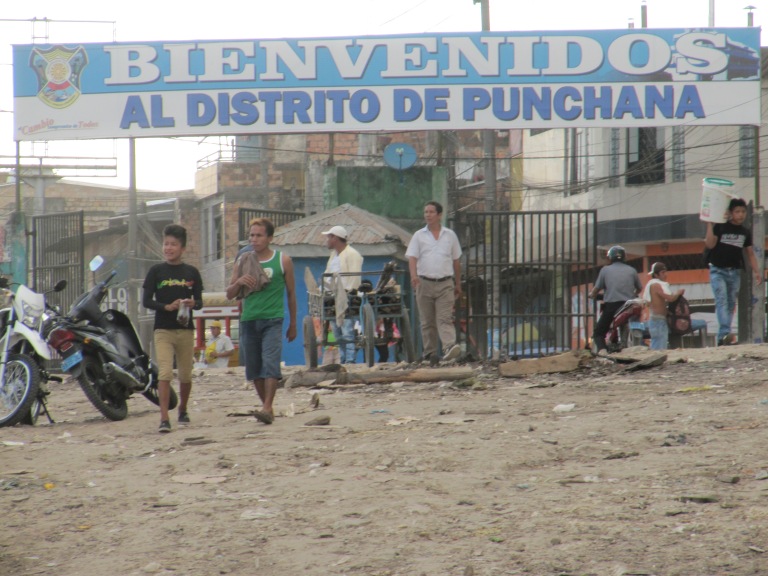 Gaining passage on board Eduardo VI was fairly easy, although intimidating. I rocked up in a tourist motorcar (what they would term a tuk-tuk in Asia) and found the docks grimy and unfriendly. A man turned to piss against a fence in broad daylight. Toilet paper and bottles littered the compacted, dusty ground. Men lounged around catcalling or else sweated as they rolled barrels onto boats and carried ice blocks on their shoulders. Large blackboards announced the times and destinations of the ships. 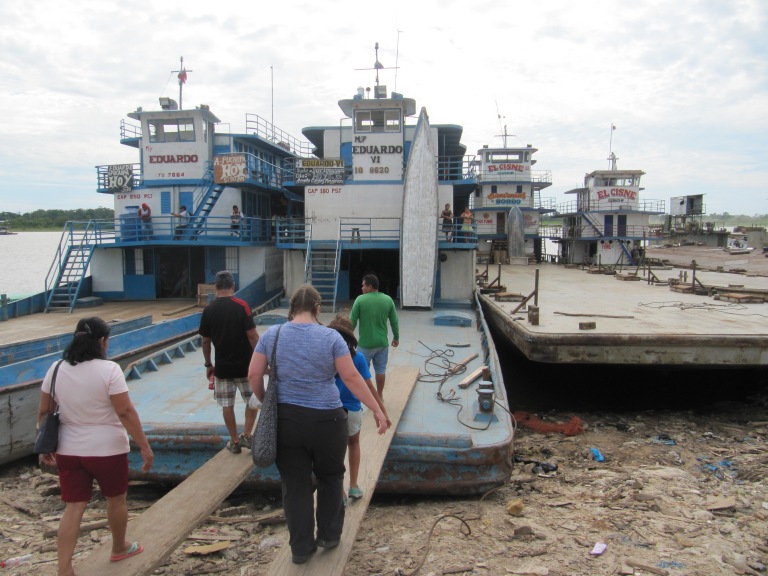 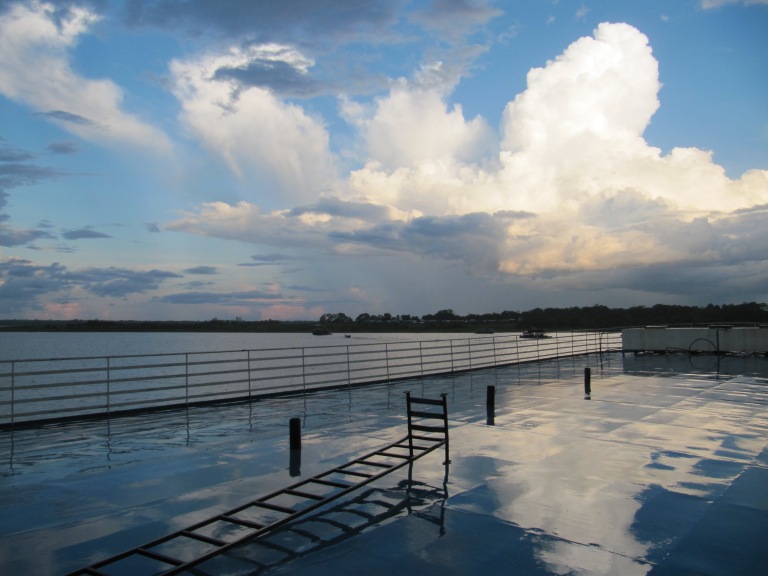 Although I was informed I should arrive several hours early, the boat, true to the South American concept of timing, did not leave until the following evening. Even then, it moved only towards the adjacent dock to load more goods. Freshly caught fish were poured into the ice containers shaped with bare feet. Engine parts for all the cars of Iquitos were piled by food supplies. 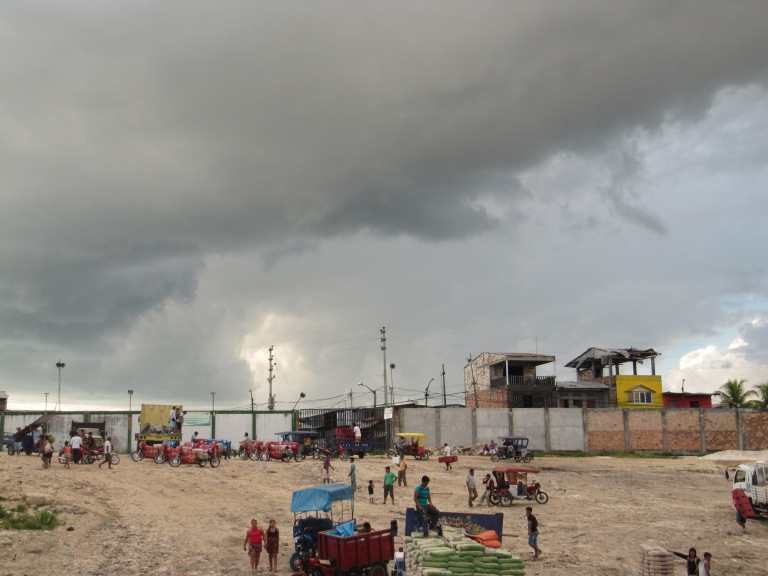 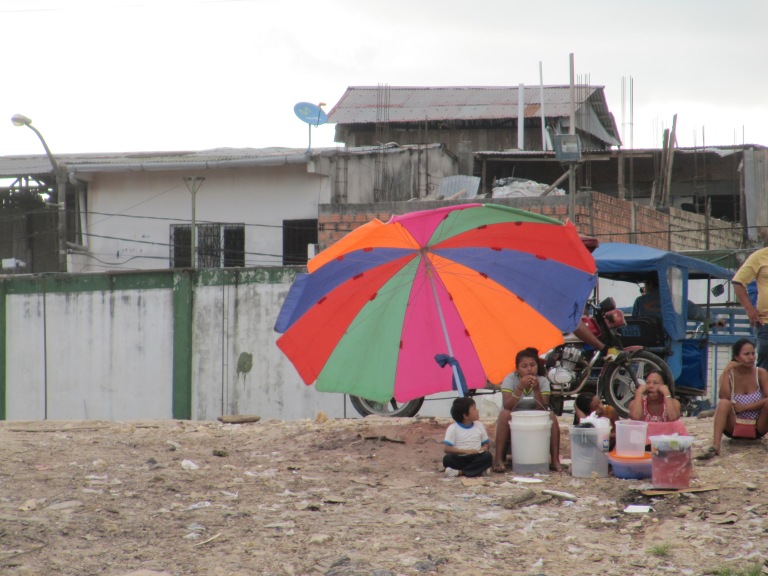 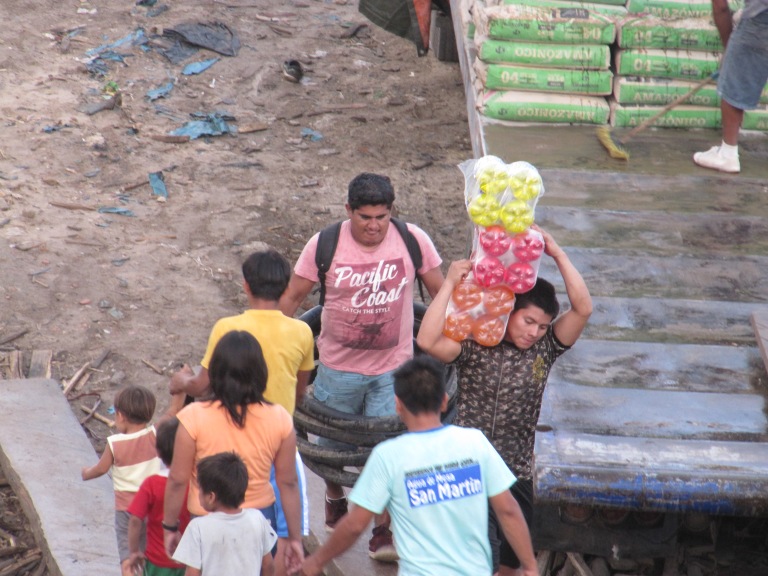 The facilities on board were basic. They consisted of cubicles containing a toilet bowl and a tap above which served as a shower. This was plumbed with yellow water straight from the same river which presumably the toilets flushed into. The atmosphere on deck, however, was so hot that those showers soon started to look appealing. 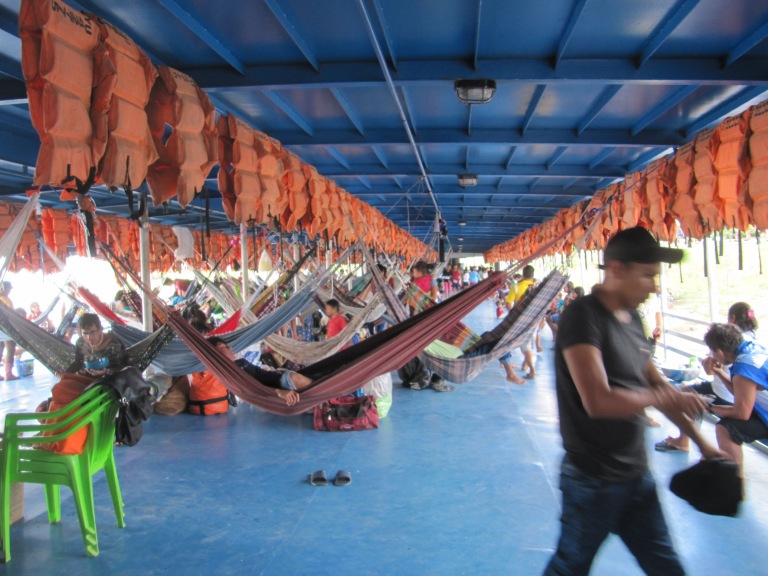 On board, you could sleep in your own hammock and three large meals a day were offered, providing you had thought to supply your own bowl and cutlery. These were usually formed of rice and meat, with an extra cockroach or two if you were lucky. 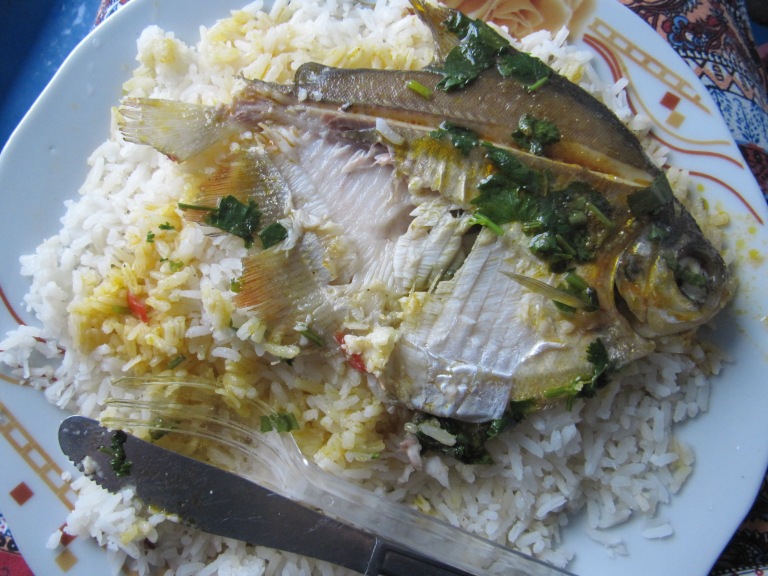 Gradually the passengers started to arrive. They were mostly Peruvian, families as well as individuals and a smattering of Europeans, one Argentinian and one man from Taiwan. Some were relocating to a new town; one French couple were heading to Yurimaguas in search of a better, friendlier life for their unborn child. A man with a long beard and robes that reached to the deck claimed he was a shaman and the French couple took his number for an Ayahuasca ritual they were planning. The Argentinian had intended to travel for three months and, when his finances drew to an end, decided that he would work to continue travelling for longer. He could speak brilliant English but was not impressed at being lumped with the gringos. A few others were simply travelling and opted to take the slower and less travelled touristic route. 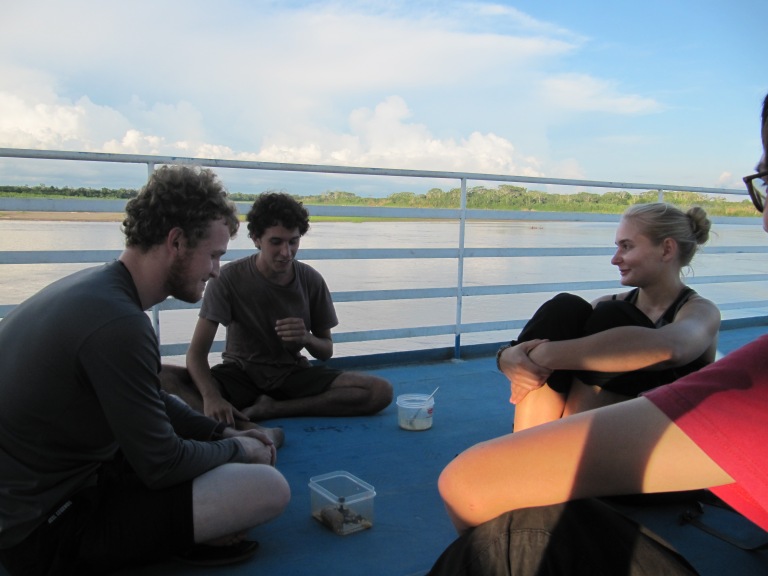 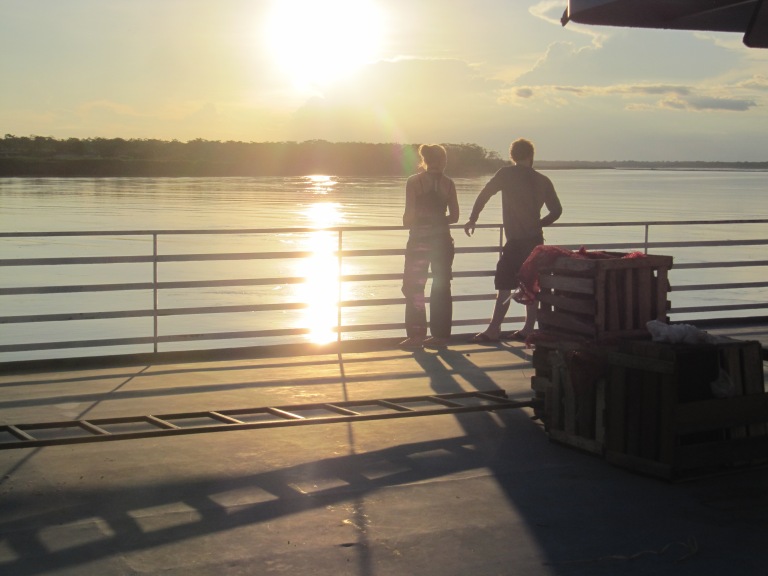 As the boat set off, I was left to admire the endless trees and take in the expressive, changing nature of the sky. I could occasionally hear the chattering of birds and other wonderfully bizarre creatures over the snarling engine. Small flurries of yellow butterflies would twirl past as if following an invisible Mauricio Babilonia. 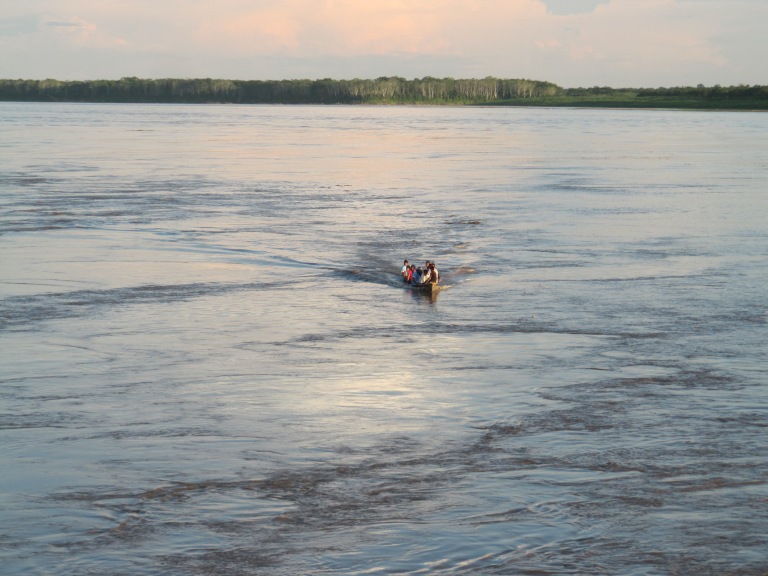 Periodically, the boat would stop on the side of the river, the only sign of the existence of a village being the perilous steps carved into the mud-bank. Locals would come aboard to sell toilet paper, fish and ‘agua, agua, agua!’ When people on board had finished eating, they chucked the remains overboard along with the polystyrene containers, much to the horror of the few Europeans aboard. On the other hand, nobody, not even the staff, seemed to have any qualms with ignoring the painted warnings of ‘no fumar- muy peligroso’ on the walls. Some things you just can’t do without for four days. 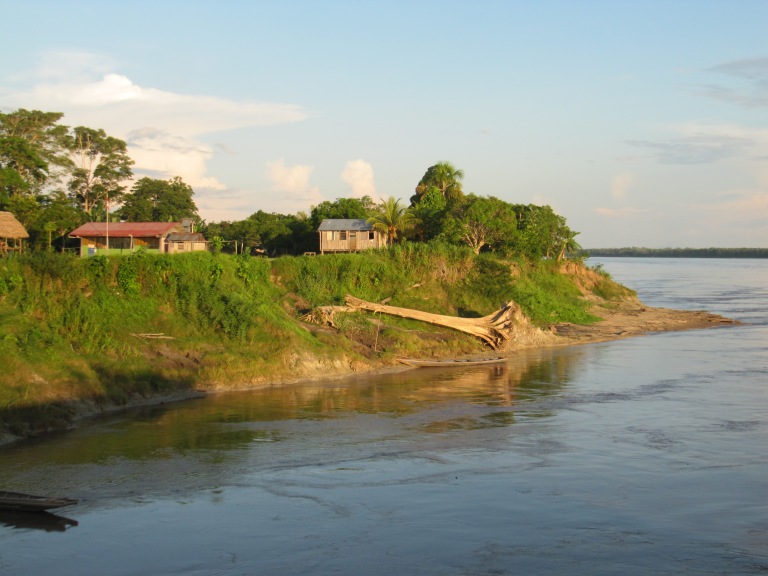 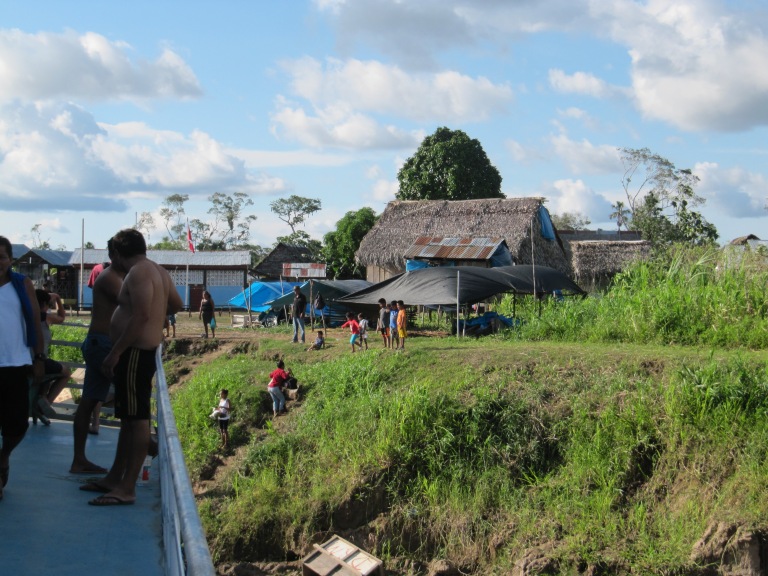 I had read that these cargo boats often become stuck during the low season and are forced to wait until the next rain storm. I imagined that ours would be likely to become stuck on one of the mounds of plastic that must have accumulated at the bottom of this worldly wonder. Already having been delayed and facing the prospect of at least another four days without Wi-Fi, I tried to avoid these morbid daydreams. Instead I passed the time resting and reading in my hammock, pacing the deck and playing cards with the other passengers. 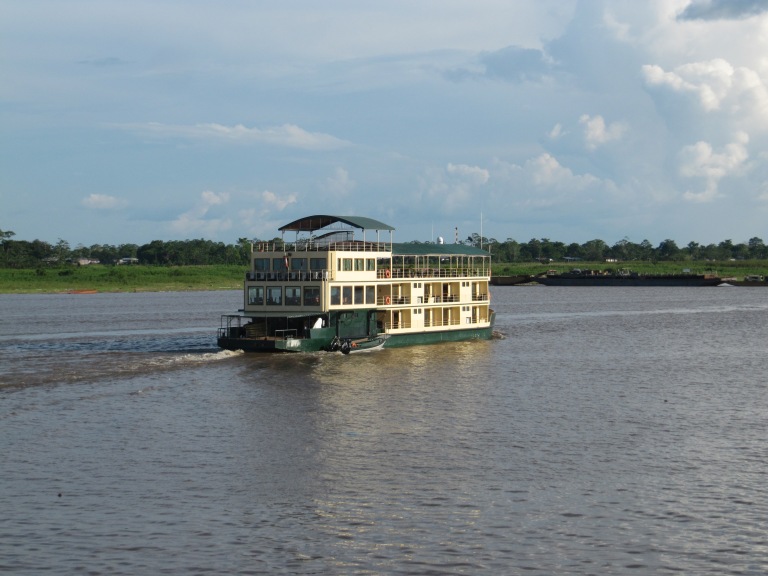 Every afternoon, the wind would gradually pick up until the clouds opened and the heat gave way to sudden rain storms and crashes of lightning. Passengers ran to save their hammocks and plastic sheets were pulled down to cover the lower decks. Later, the dusk would reveal stunning, 360 degree sunsets as we glided further upriver. 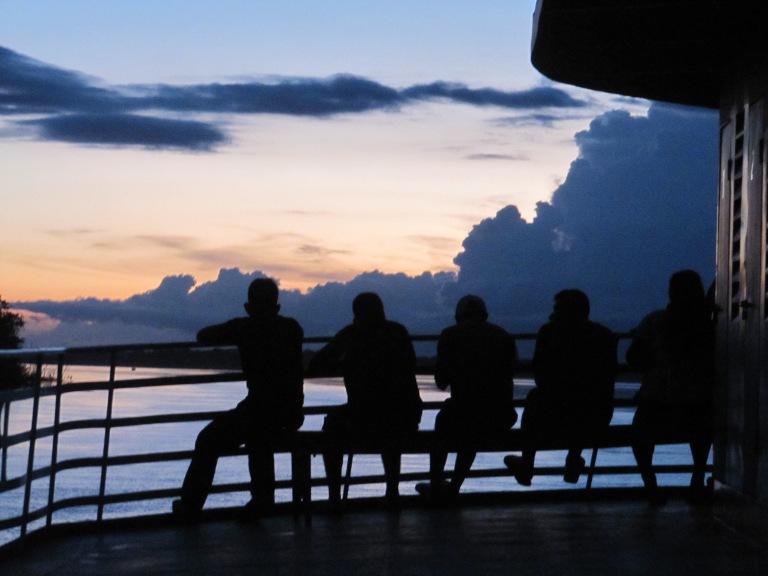 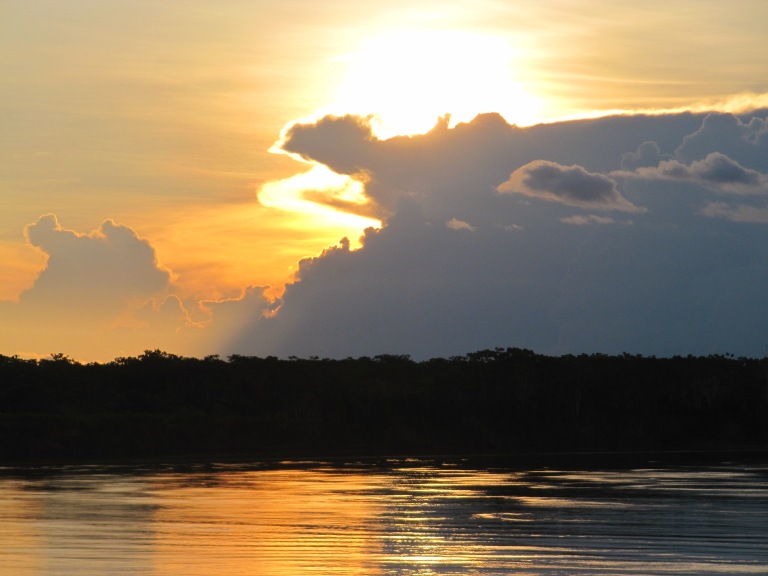 When finally, the jungle was beginning to give way to palm plantations and the village stops becoming more frequent, we could tell we were arriving in Yuri. Packed and ready to go, we ate our last meal in the drizzle and watched the grey town swerving into view. The rain had become a downpour by the time everyone had disembarked into the chaos of motorcars calling and jostling for passengers. I was frazzled to have arrived back on solid ground and be faced with this multitude of people. Relief came at long last, when I reached a shower and a dry cosy bed. 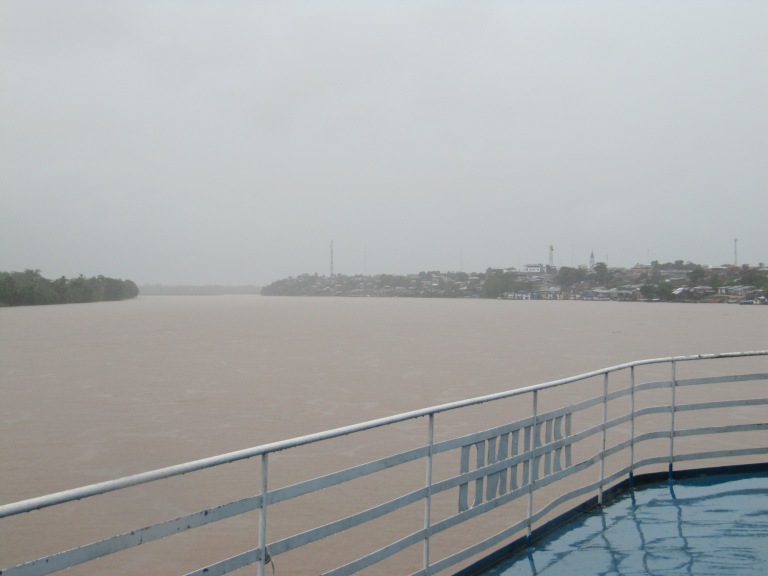 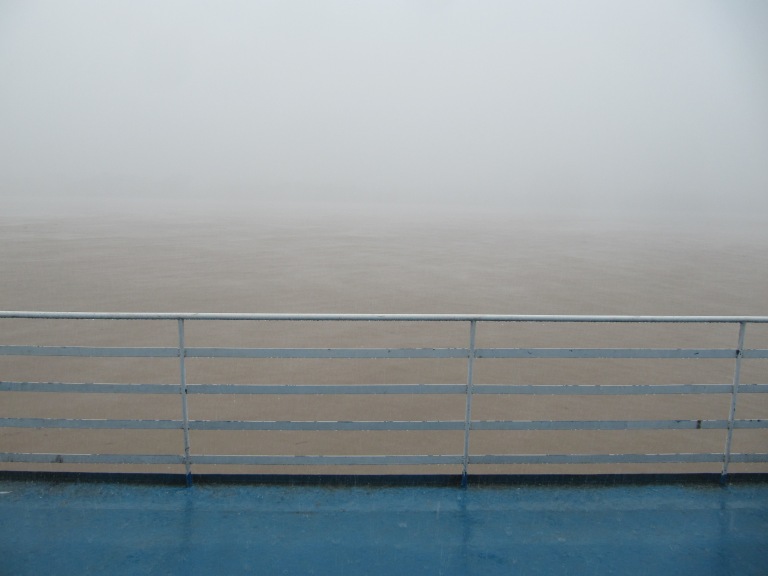 3 thoughts on “MY AMAZONIAN RIVER ADVENTURE”