Graveyards are creepy at the best of times. We have all seen those horror films in which teenagers think it will be fun to visit the local cemetery after dark. The blond girl wanders alone, perhaps sipping a slushy. You know that she will not make it home. Even having watched Buffy the Vampire Slayer combat these stereotypes alongside demons, I still have a sense of foreboding as I head into the cemetery.

There are discarded condoms, crumbling marble tombstones and people wrestling with their vicious dogs. There are certainly too many people around for Christopher Somerville to justifyably include it in his book of Britain and Ireland’s Best Wild Places: 500 Essential Journeys.

But, despite my sense of unease, everyone seems to be enjoying themselves. A woman laughs loudly from a bench as she rants over the phone. A grey haired man smiles as he passes me, smelling of sweetly illegal smoke. School groups in brightly coloured raincoats trail after their teachers.

Abney Cemetery was built to compensate for the overflowing graves of London in the nineteenth century. During the Industrial Revolution, the population boomed and the existing graveyards could not cope with this change. Abney Cemetery was thus created. It was particularly unusual in that it was made accessible to dissenters and those who did not practice their faith with organised religion.

Two hundred years on, many of the gravestones are collapsed and overgrown with ivy, almost on top of each other. Long, winding paths conclude with pillars and angels lurk amongst the buddleias. The cemetery is not active; very few of the graves I saw were recent. This probably explains why it is treated more as a park by the locals instead of a sacred place. 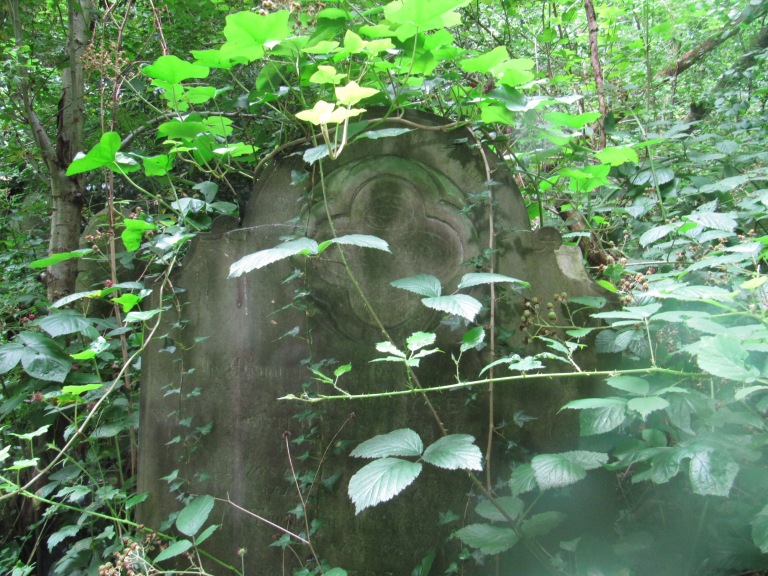 However, the main attraction of the park is its biodiversity. It is home to species ranging from the common ash to Bhutan pines. Many of these are pruned to prevent damage from the high winds that threaten to close the park. Some are even maintained in death; the park rangers are proud of their damaged or even dead ‘veteran trees’ which provide habitats of wood rot to support fungi, insects and small mammals. The grounds even support some of the rare phylloporia ribis fungus.

Watching the dappled sunlight cast its shadows across the ferns and pairs of speckled wood butterflies twirling towards the sky, it is easy to forget for a moment that you are in London. Just for a moment.

One thought on “Abney park cemetery”